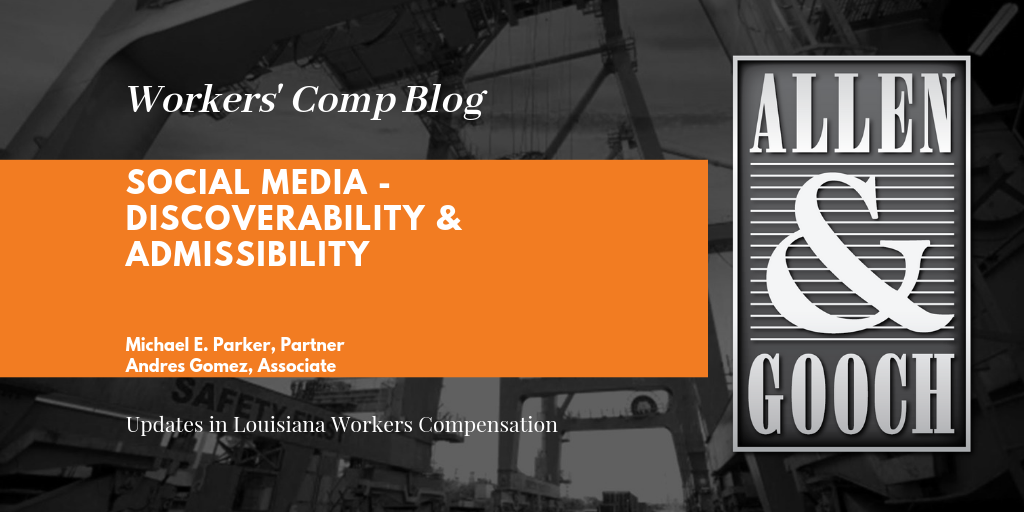 What is Social Media?

One of the biggest issues related to the use of social media evidence in the courts is the lack of a clear definition of what constitutes “social media.”

The legislature has attempted to define this term numerous times. R 2019 Louisiana House Bill No. 465 defines a social media website as:

This Bill was introduced to create the “Internet and Social Media Privacy and Protection Act.” The purpose of this act is to provide for internet privacy and the protection of consumer personal information, to provide definitions, to provide basis for consent, and other related matters.

Social Media and the Law

Social media is such a pervasive aspect of society that, to date, laws related to social media have typically been broken down to address a specific topic. In Louisiana, those include:

One of the biggest issues that the social media landscape is facing is the companies’ ability to ban users and reason to doing so. Facebook has recently come under fire for seemingly blocking users of a particular political persuasion that espouse and communicate certain beliefs. This became a big issue with the banning of political commentator Alex Jones. Similarly, Twitter has been accused of banning from the platform users who they feel have violated their terms of use but have offered no explanation and no ability to appeal.

Laws continue to be enacted around the country in an attempt to standardize what social media is and how it should be allowed to be used. Additional laws are constantly created that push for more regulation

The courts have provided a number of rulings regarding discoverability, however, Farley v Callais & Sons LLC, has emerged as the leading case related to the discoverability of social media. The Court set parameters by providing guidelines. Specifically, they stated:

Based on all the foregoing authority and the facts of this case, the Court finds the following categories of information discoverable from Farley’s Facebook account, from March 24, 2014 (the date of accident) to the present:

In a case tried by Allen & Gooch’s own Keith Landry, Walmart, Inc. v. Ohler, the First Circuit Court of Appeal concluded that social media accounts are generally discoverable and remanded the case. The Court determined that the trial court was to conduct an in-camera review of the social media content and, by applying the pertinent Farley factors, determine whether any posts or information relate to the date of the accident.

To introduce evidence, it must be first be authenticated. Authentication of social media posts and information can be complicated as there is no clear evidence that the information was created or written by the individual who owns the social media site.

In State v Smith, the court stated that the “standard for proper authentication of social media evidence was whether sufficient evidence supported finding by reasonable jury that it was what the proponent claimed it to be.” (State v. Smith, 192 So. 3d 836 (La. Ct. App. 4th Cir. 2016). In State v Jones, a witness testified that the Facebook messages being introduced into evidence were sent from the defendant’s Facebook account to hers. The court determined that the witness “explained that she knew the defendant was the author of the messages because no one else knew his Facebook account password and because of the contents of the messages, which aligned with the state of their relationship and what the defendant told her in his motel room on the night of the incident. We find no error or abuse of discretion in the district court’s ruling that the messages were admissible.” State v. Jones, 2015-1931 La. App. 1 Cir. 6/29/16, 2016 WL 3569911 (La. Ct. App. 1st Cir. 2016).

Current jurisprudence supports the authentication of social media messages and posts if they can be properly authenticated. Louisiana Code of Evidence Article 901 lists examples for which authentication can be established. Current jurisprudence has relied heavily on the testimony of individuals able to provide the extrinsic evidence required for such authentication. To properly authenticate, it seems that it is necessary that testimony come from individuals that have an established rapport with the individual. In instances where the witness providing testimony does not have a rapport and has had limited interaction, the court will determine that there is not a sufficient relationship for the witness to know who is writing that information.

Although social media posts and messages may be considered hearsay, statements that are introduced to show that an utterance occurred or a conversation took place are admissible. In State v Green, where a defendant appealed the admission of screenshots of his Facebook account, the court stated, “the contested evidence was not introduced to show the truth of the communications, but to show that the communications took place. That the communications occurred is a necessary element of the crime of computer-aided solicitation of a minor.” State v. Green, 164 So. 3d 331 (La. Ct. App. 2d Cir. 2015)

To request a copy of the full conference materials, contact claireoliver@allengooch.com