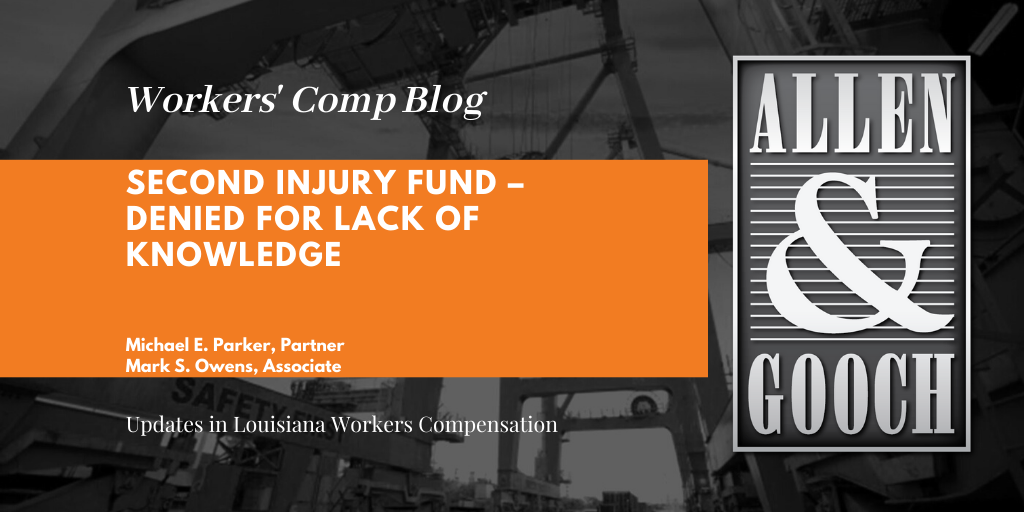 The Louisiana Second Injury Fund is designed to protect those employers that hire an employee with a pre-existing permanent partial disability in the event the employee is subsequently injured on the job. The protection afforded to an employer is provided in the form of a reimbursement if, and only if, the employer can satisfy strict compliance with Louisiana Revised Statute 23:1371, et seq.

For the Louisiana Second Injury Fund to apply, the employee must have had a pre-existing permanent partial disability at the time of being hired. The employer, in order to take advantage of the reimbursement, must have had actual knowledge of the employee’s pre-existing disability prior to the subsequent injury. To gain this knowledge, we recommend that employers provide their employees with a post-hire medical history questionnaire only after the employee is offered a position so as to avoid any potential conflicts with the Americans with Disabilities Act.

Once provided with the questionnaire, the onus is then on the employee to be forthcoming about prior accidents and/or injuries they have sustained. Thus, if the employee is truthful and admits to sustaining a prior injury in the past, and then sustains a new injury on the job, the employer stands to be reimbursed by the Second Injury Fund if the employee’s new injury would not have occurred but for the employee’s pre-existing injury and the requirements of LSA-R.S. 23:1371, et seq. are otherwise met.

The question then becomes – “What remedies does the employer then have?”

Thus, the employer, who believes an employee has been untruthful on the post-hire medical history questionnaire, can argue that under LSA-R.S. 23:1208.1, the employee should not be entitled to benefits for their failure to disclose a pre-existing injury. The Court of Appeal, Fourth Circuit in Lovas v. Gallagher Bassett Services, Inc. expanded on LSA-R.S. 23:1208.1 and held that the employer bears the burden of proving that the employee made “an untruthful statement; [that there was] prejudice to the employer; and [there was] compliance with the notice requirements of the statute.”

The Court in Lovas concerned an employee that sustained a work-related accident to multiple body parts, namely his right ankle, while employed at Turner Industries Group, LLC (“Turner”) on or about July 7, 2016. The employee was thereafter diagnosed with a right ankle dislocation. The employee’s physician, Dr. Douglas Lurie, performed surgery on the employee and released the employee to work on the same date as the surgery. The employee did not return to work, however, but continued to receive benefits until being hired by Simmons Planting and Grinding (“Simmons”) on February 7, 2017. The employee was then released from his employment with Simmons approximately seven months later in October of 2017.

During his employment with Simmons, in or around June 2017, the employee sought treatment from Dr. Lurie and complained of back and foot pain and attributed both ailments to the accident sustained while employed with Turner. Dr. Lurie evaluated the employee and released him back to work. The employee then filed a Disputed Claim for Compensation (“Claim”) on the same day as his visit with Dr. Lurie. In response, Turner answered the Claim and asserted the affirmative defense of fraud.

Turner’s argument was that the employee was untruthful on his post-hire medical history questionnaire in that the employee had a long history of back pain prior to being hired with Turner, but failed to disclose the same. As a result, Turner had no actual knowledge of the employee’s pre-hire condition(s).

After a trial on the merits, the Court ruled in favor of Turner and made the following determinations: that the employee made untruthful statements on the post-hire medical history questionnaire; the questionnaire complied with the notice requirements by advising the employee that his failure to answer truthfully may result in forfeiture of workers’ compensation benefits; and there was prejudice to the employer considering the untruthful answers on the questionnaire directly related to the medical condition that was the subject of the instant claim. Accordingly, the employee forfeited additional workers’ compensation benefits due to his untruthful statements and willful misrepresentations.

The Lovas decision highlights the situation that occurs when an employee is untruthful on the post-hire medical history questionnaire and such misrepresentations prevent the employer from acquiring the actual knowledge required for the Louisiana Second Injury Fund to apply. It is therefore imperative for employers to understand the importance of ensuring that new hire employees are presented with and complete a post-hire medical history questionnaire.

The employer that gets denied reimbursement by the Louisiana Second Injury Fund due to lack of actual knowledge, while faced with an unfortunate and costly situation, should know that its remedies are not completely lost.